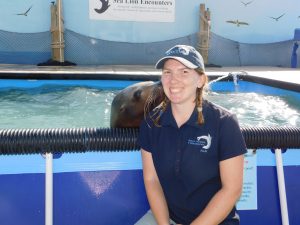 Michelle has had a love for animals since a young age. She realized her passion for marine mammals after a Dolphin Encounter experience at Discovery Kingdom. Originally from San Jose, CA, Michelle moved down to Monterey to pursue a Marine Science degree from CSU Monterey Bay. She found out about SLEWTHS through a friend and immediately applied. Michelle joined the SLEWTHS family in 2010 and reached the Head Trainer level in December of 2016. She currently is going back to school to get her teaching credential. She loves learning from Dr. Jenifer Zeligs and spreading conservation awareness to all.

Since before she could walk, Jessie has been a member at the Long Beach Aquarium. She spent countless hours at the Aquarium’s touch pools receiving hands-on experience with ocean life that quickly developed into a desire to learn more about the ocean. In 2014 she moved from Southern California to the Monterey Bay to attend CSU Monterey Bay and pursue a degree in Biology. After hearing about the SLEWTHS project through a friend, she knew she had to apply. Jessie joined the SLEWTHS family in January of 2018 and is now a Senior Trainer. She has been eager to expand her animal care knowledge and her animal training journey. 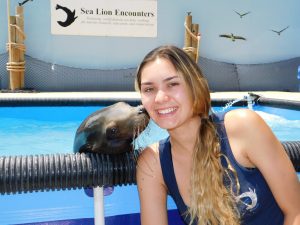 Originally from the small town of Cool California, Kat grew up consistently around animals. Her family bought a large acreage that allowed her to have a variety of animal family members from cats and dogs to chickens, horses, goats and llamas. This continuous relationship with animals from a young age instilled in her a strong love for animals of all kinds. This love pushed her to attend college at CSUMB as a Global Studies Major with a minor in Psychology. From this she hopes to work internationally with foreign countries to improve environmental protection laws and expand wildlife preserves. She joined SLEWTHS in November of 2017 recognizing the importance of teaching aquariums and how they help connect people with ocean life. She hopes to use her experiences here as a platform to pass on values of conservation to individuals around the world. 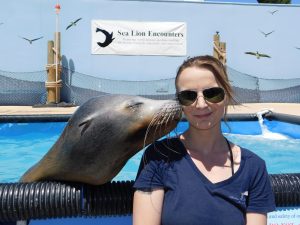 As a Marine Corps kid originally from Camp Pendleton in Oceanside, CA, Kali moved around a lot but was lucky enough to share her childhood with a sweet yellow lab as her constant companion. After many years away from California, she finally made her way back to the coast in 2014 to pursue a degree in Biology at CSUMB, graduating in 2017.  Kali took a seasonal position as a Wildlife Technician at the SPCA of Monterey County and soon after discovered the SLEWTHS project. She was fortunate enough to join the program in February of 2019. She began her Master's of Marine Science at Moss Landing Marine Laboratories in the Fall of 2020 and hopes to pursue a career studying behavior in marine vertebrates. 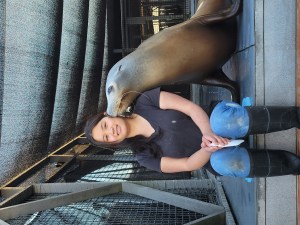 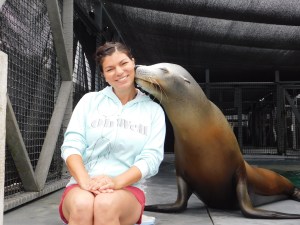